A Strawberry Rhubarb Custard Pie Worth Brawling Over 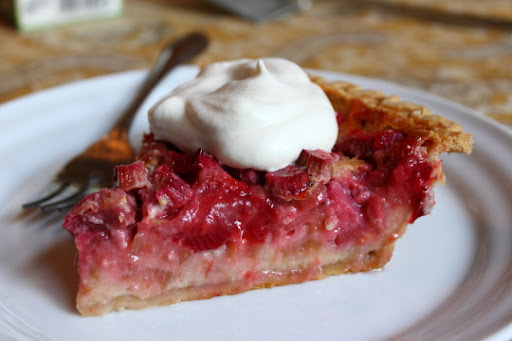 Because I grew up listening to baseball on the radio, whenever I heard the word “rhubarb,” I wouldn’t think of something edible and delicious like this amazing Strawberry Rhubarb Pie, I’d think of fights.
Back in the early days of radio, when they wanted to get the sound effect of an angry mob, they’d tell the performers to repeat the word “rhubarb,” over and over. It sounds heated and contentious, yet the listener doesn’t hear any specific words.
Baseball announcers of the same era began to call baseball fights “rhubarbs,” since they sounded so much like those radio effects. I didn’t learn about this until recently, and it made me think of all the games I’d listened to during all those summers, and how never once when I heard “rhubarb,” did I think of pie. 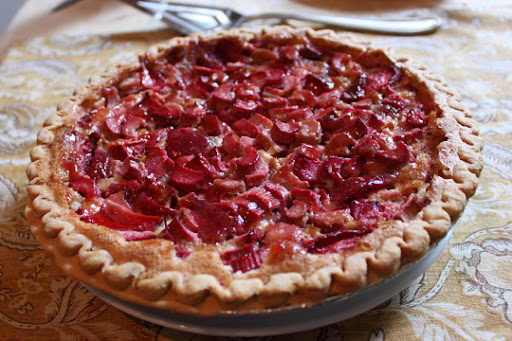 That was until I got this wonderful recipe from my mother Pauline, who I believe got it from my Aunt Angela. As you longtime readers know, both are fantastic bakers and while I love all their pies, this might be my favorite.
So, when Matt Cain drills Matt Kemp in the back this summer, and he charges the mound prompting an ugly benches-clearing brawl, and the play-by-play guy says, “we’ve got ourselves a real rhubarb now,” I will think of this pie. This delicious, rough and tumble pie. Enjoy!
3 cups sliced rhubarb
1 cup quartered strawberries
3 large eggs
pinch of fresh nutmeg
3 tbsp milk
3 tbsp all-purpose flour
1 1/2 cups sugar
*I didn’t mention, but I added a very tiny pinch of salt
1 tbsp butter for "dotting"
pie dough for one 9-inch crust
For the glaze:
2 tbsp jam with 1/4 tsp water, warmed in microwave

View the complete recipe
Posted by Unknown at 11:49 PM