Squash Birds of a Feather

Those of you familiar with competitive yellow squash carving know how intense these contests can get, and an event I recently co-hosted with Allrecipes in Seattle was no different. The tension was so thick, you could've cut it with a swag-bag paring knife.
This battle royal took place at the conclusion of BlogHerFood weekend, and an exclusive group of foodies were invited based on their blogging experience, passion for edible art, and to a much greater extent, their availability. 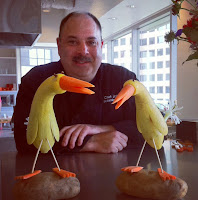 The theme of the day was centered on my mascot and lifelong friend, the squash bird. After regaling them with the strange and mostly true story of how it came to be, and demonstrating how I make the bird, our honored attendees set to work creating their own renditions for fun and fabulous prizes.
Despite bottomless Mimosas, I thought the birds  these “gordiators” produced were extraordinary. Here are a few of the highlights.

I only had my cell phone to take pictures with, so the blurry shots are mine. Thankfully my friend Irvin at Eat the Love was there, and graciously shared some of the pictures he took.
The winning bird was from Michael Procopio, the blogger/food writer behind the always entertaining Food for the Thoughtless. The classic combination of huge beak and fabulous hat proved irresistible to the judges. More subtle was the upright posture, which gave the bird an almost regal stance.

In addition to being a squash bird boss, the hilarious Mr. Procopio also gives good Twitter, so be sure to check him out there. By the way, be prepared to look stuff up on Wikipedia. 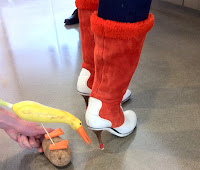 Speaking of fabulous, the inimitable Linda Nicholson, aka Salty Seattle, was also in attendance. As you can see, she was clearly trying to distract the competition with her choice of footwear, which mimicked the bird’s bright orange feet. Did it work? Not really, but who cares? Look at those boots!
Her squash birds were almost as striking. The saline siren attempted an ambition scene consisting of what appears to be two squash birds trying to land on the same rock.
Unfortunately, during the lunch break, some mayo from her sandwich must have fallen on the birds, and she was disqualified for violating Chapter 3, Section 7 of the official rules, which covers inappropriate use of condiments.

Many attendees utilized "hair" and other eye-catching accessories to make an impression. Sean Timberlake from Hedonia tried to pull off the rarely seen cock’s comb/toupee combo; and DPaul Brown from dpaulbrown.com's follic affectations not only dressed up his entry, but also helped indicate what kind of cigarette was in the beak.

Another favorite was this submission from Andrew Wilder at Eating Rules. I thought it was a smart approach to make the bird look like it was bending over feeding. 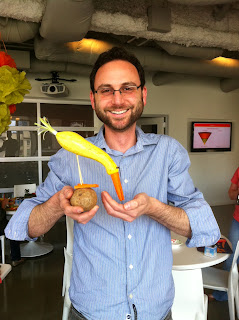 We assumed Andrew was trying to show movement, although he did spend a lot of time making sure everyone saw just how anatomically correct the tail end of his creation was, so there may have been ulterior motives.
Anyway, we really did have a great time, and I want to thank everyone who participated. Also, a huge thanks to my friends at Allrecipes for hosting and organizing such a fun event!

If you want to learn how to make your very own squash bird, check out this video, and as always, enjoy!
Posted by Unknown at 8:39 PM