Baked Mushroom Risotto – Why Stir When You Can Stare at an Oven? 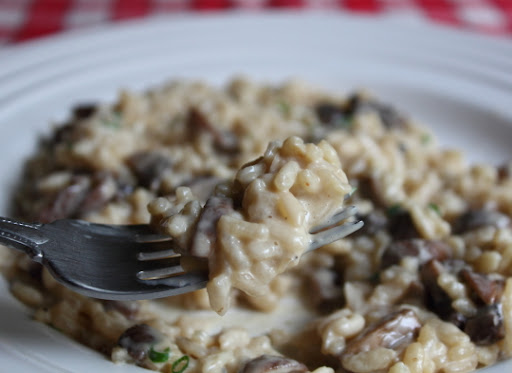 It’s not often that I post a video for an alternative method on a classic recipe before I’ve actually shown the real deal, but that’s what we have with this incredible baked mushroom risotto.
I was playing around with a baked paella recipe, and began wondering what would happen if I used a similar method for doing risotto. As you’ll see, the beginning and the end of the recipe are pretty standard, but we’ve taken the middle 15 minutes and moved it into the oven, in an attempt to eliminate those dreaded “variables.”
The size, shape, and thickness of your pan, how fast you add the liquid, and how high your heat is are factors that can wildly affect the outcome when done on the stovetop. By using the oven for the majority of the cooking, we don’t have as many things to worry about.
Of course, you still need to finish this thing off yourself, and taste and test for doneness and seasoning, but that goes for any recipe. The goal is to have the rice come out of the oven between 80-90% cooked, so that all it takes is a final addition of liquid, and a few minutes of stirring to recreate that signature “sauce” that makes this dish so famous. 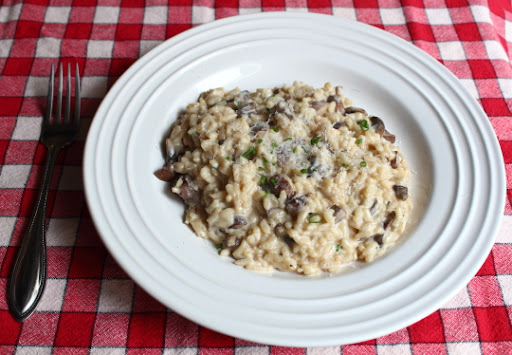 I used a variety of risotto rice called “Carnaroli,” which is known as "the king of rices.” Thanks to a higher starch content and slightly longer grain, Carnaroli produces a beautifully creamy sauce, while still maintaining a firm, toothsome texture. You should be able to find it fairly easily at those fancy grocery stores, but if not, it’s readily available online.
If you end up using Arborio rice, the most popular variety sold for risotto, I’d suggest checking this after 10 minutes in the oven, as I suspect it will cook slightly quicker than the Carnaroli. Besides, you can always cook it an extra few minutes at the end. As many of us have learned the hard way, you can’t un-cook something.
Besides being easier and more repeatable, this method produced a risotto that was identical in looks, taste, and texture to anything I can do on the stove. Having said that, I enjoy standing at the stove making risotto the traditional way, as it’s one of the best meditations ever, so it will be interesting to see which method I use the next time I’m craving the dish.
Anyway, whether you’ve always been afraid to try risotto, or you’ve mastered it and are just curious, I hope you give this a try soon. Enjoy!
Ingredients for 4 portions:
3 tbsp butter
3 cups diced mushrooms
1/2 yellow onion, diced
salt and pepper to taste
cayenne to taste
1 cup Carnaroli or Arborio rice
2 1/2 cups chicken broth, plus more if desired
1/2 cup cream, plus a few tablespoons to finish
1/2 cup finely grated Parmigiano-Reggiano (don’t use that fake crap)
2 tbsp sliced chives

View the complete recipe
Posted by Unknown at 5:46 PM