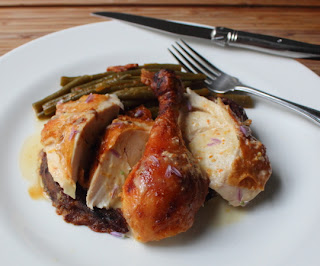 This take on the Standard Grill’s famous “Million Dollar Chicken,” showed me once again that so many of life’s great culinary pleasures happen when you least expect them. I saw this recipe featured on TV recently, and chose to try it for two main reasons: one, it’s slathered in crème fraiche; and two, it’s roasted over caramelized, chicken drippings-soaked bread.
I know, we had you at “slathered in crème fraiche,” but it was the bread that I was really looking forward to when I pulled this out of the oven, which is why I was so bummed when I thought I'd ruined it. Since I got greedy and used an extra slice of bread, and also used a larger roasting pan, the bread cooked to what would generously be referred to as “golden-black.” 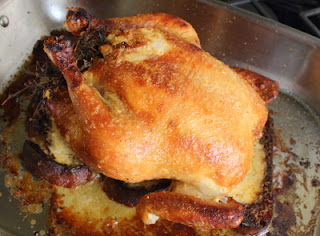 Several times during the glazing at the end, I contemplated tossing them out and simply making a joke about it during the narration, but I’m SO glad I didn’t. I can’t explain why, but not only didn’t it taste like burnt toast, it truly tasted fantastic. For purely aesthetic reasons, I’ll encourage you to use a smaller roasting pan, which will better insulate the edges of the bread, but I wasn’t exaggerating when I described just how great it really was. I promised to stop using the word “unctuous,” but it actually seems appropriate here.
It was so saturated with chicken fat, caramelized juices, and crème fraiche, that the bitterness from the darkest parts of the bread seemed to balance the richness somehow. The point is, if mine was good this dark, one shade lighter should get you even closer to million dollar chicken nirvana. I hope you give this “rich” combo a try soon. Enjoy!
Ingredients for 4 portions:
4 1/2 pound whole chicken
salt and pepper to taste
1 lemon
1 bunch fresh thyme
1 bay leaf
3 cloves garlic (original recipe calls for adding a few cloves of garlic in the cavity with the herbs and lemon - I didn't, since I had included garlic in the last twelve things I'd eaten, and was taking a break, but feel free to add!)
olive oil, as needed
3 thick slices day-old French bread (I used sourdough)
For creme fraiche glaze:
1 cup creme fraiche
1 zest of one lemon
juice of one lemon
1 tablespoon grated shallot puree
1 teaspoon Aleppo pepper
- Cook at 450 degrees F. for one hour, then glaze, cook for 10 minutes, and repeat until chicken is done. (Note: If you use a different size chicken, you’ll obviously need to adjust your times. Cook until internal temp in thickest part of thigh is 165 degrees F.)
- The original recipe from the Standard Grill in NYC calls for finishing with Maldon sea salt. I didn't, but that always a nice option.