Orange Duck – Orange You Glad I Didn’t Call It Duck a l'Orange? 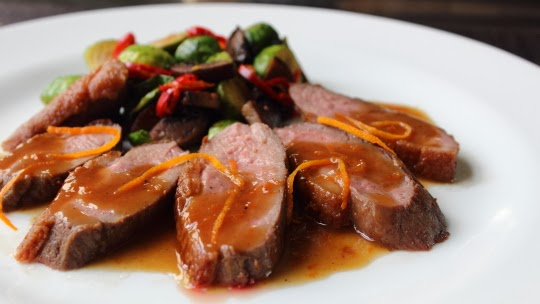 I don’t think I’ve made Duck “a l'Orange” since culinary school, nor tried to pronounce it, but thanks to a rather enticing photo in a friend’s cookbook, I decided to go full culinary time machine, and I’m so glad I did.
That friend would be award-winning food blogger and author, Hank Shaw. He’s recently published a cookbook called Duck, Duck, Goose: The Ultimate Guide to Cooking Waterfowl, Both Farmed and Wild, which was the inspiration for this gorgeous, and very easy dish. Still looking for a sexy Valentine’s entrée? You could do a lot worse. 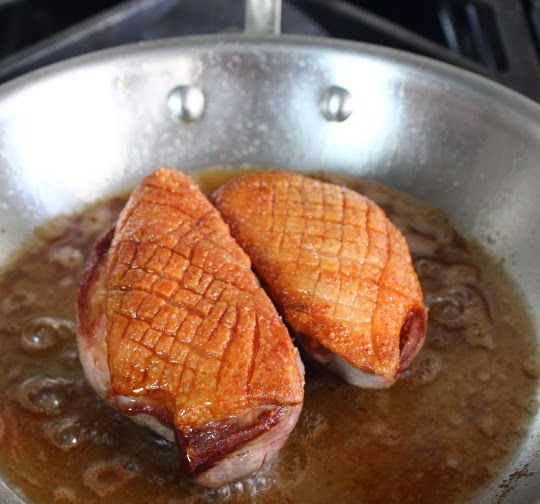 This is one of those classic dishes that somehow became a cliché, and people stopped making it for fear of looking un-cool, which is too bad, since it’s really good. This is traditionally done with a whole roasted duck, but by using breasts we get pretty much the same results, in a lot less time.
My version is very close to Hank’s, except I don’t use orange juice. I prefer the flavor of the sauce with just marmalade, zest, and Grand Marnier. Speaking of the Grand Marnier, other than other orange liquors, I’ll be offering no alternatives. That’s what literally gives the sauce its soul.
By the way, if you want to raise your “game” game, I encourage you to check out Hank's cookbook. I think it’s very well done, and gets basically all 5-star reviews on Amazon. So, check that out, check this out, and as always enjoy!
Ingredients for 2 portions:
2 duck breasts
salt and pepper to taste
1 tbsp duck fat or vegetable oil
1 tsp flour
2 tsp grated orange zest
2 tbsp Grand Marnier (orange liquor)
1 tbsp sherry vinegar
pinch of cayenne
1 rounded tbsp orange marmalade (preferably Seville orange marmalade)
1 cup chicken broth
1 tbsp butter
extra zest for garnish
Posted by Unknown at 2:13 AM