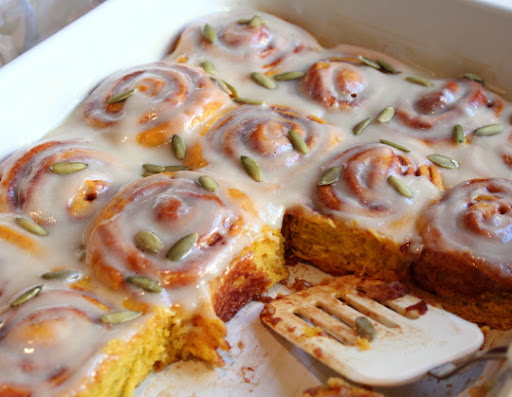 When I was asked to join some of my fellow foodies on YouTube, to produce a video for a special seasonal playlist called “Halloween Sweet Treats,” I sat down and considered all the scary sweets recipes in my repertoire. After several minutes of deep thought, I realized I had nothing.
Not to sound like a curmudgeon, but sticking broken pretzels into a marshmallow and calling it a “scary spider,” just isn’t my thing. So, instead of trying to figure out how to make a chocolate truffle look like a bleeding eyeball, I made a batch of pumpkin cinnamon rolls. They may not be scary (what’s the opposite of scary?), but they are seasonal, and incredibly delicious. 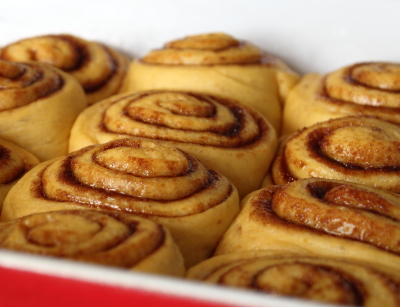 I used to joke that when Halloween/Thanksgiving time rolls around, the only thing a chef has to do to make a recipe seasonal is to add some pumpkin to it. Chili with a spoon of pumpkin stirred in? Halloween chili! Dinner rolls with a spoon of pumpkin kneaded into the dough? Thanksgiving dinner rolls!
Well, that’s exactly what I did here, and while it may be formulaic, it also produced the best cinnamon rolls I’ve ever tasted. One key is a nice soft, sticky dough. Be sure to only add enough flour so that the dough just barely pulls away from the side of the bowl as it kneads.
You can certainly embellish by adding some chopped walnuts or pecans to the cinnamon-sugar layer, but since I decided to garnish with pumpkin seeds, I went sans nuts. Anyway, despite not being very horrifying, these really would make a special treat at any Halloween party. I hope you give these a try soon. Enjoy!
Ingredients for 16 Pumpkin Cinnamon Rolls:
(I used a deep 13 x 9 baking dish)
Bake at 350 degrees F. for 30 minutes