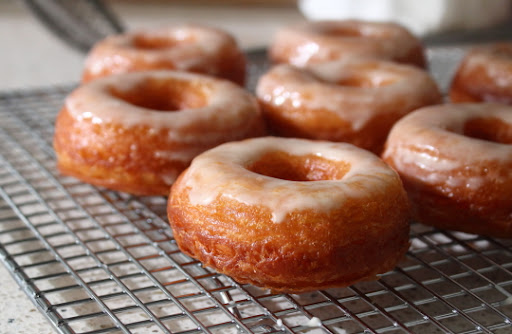 I’m assuming that since you’re on a food blog you've probably heard about “cronuts,” but just in case, here’s a quick review.

This croissant/doughnut hybrid was invented by Dominique Ansel at the Dominique Ansel Bakery in New York City. It became an overnight sensation, and now people stand in line for hours just for a chance at getting one of the precious few that are made each day.
Why all the hype? Very simple – it has the shape and flavor of a doughnut, yet features the crispy, flaky texture of a buttery croissant. What’s not to hype? Anyway, after seeing like two dozen new reports on the craze, and receiving a scary number of food wishes for it, I decided to give it a go, if for no other reason than to save a few of my NYC friends the humiliation of being Instagrammed standing in that line. 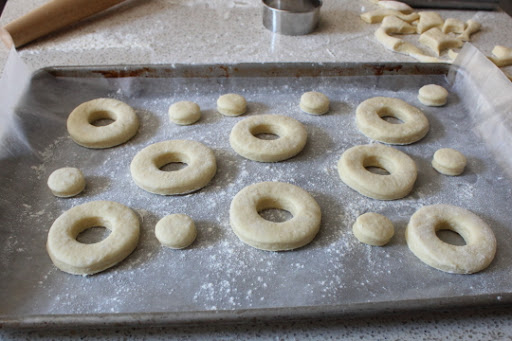 Since I’ve never tasted a cronut, what follows is purely an educated guess, but I think I got pretty close. Maybe one of you New Yorkers will mail me one, so I know for sure? My game plan was simple. Make a slightly sweet, yeasty, doughnut-esque dough, which I’d then layer with butter, using the classic croissant technique.
It’s a procedure I do all the time, as in once, back in culinary school, thirty years ago. So, instead of going by the book, or even looking in a book, I winged it, and not only that, I streamlined things too. Instead painstakingly pounding out perfectly sized slabs of cold butter, I decided to try simply spreading softened butter instead. I also threw caution to the wind, and pulled off the rare and terrifying “double fold and turn,” and lived to tell the tale.
Like I said in the video, we’ll cover the final results in Part 2, but spoiler alert…these were awesome. I did two different versions, one regular, and one with an extra “fold and turn” which resulted in a taller, and even more impressive cronut. Stay tuned!
Ingredients for 16 Cronuts:
1 package dry active yeast (2 1/4 tsp)
1/2 cup warm water (105 degrees F.)
1 teaspoon fine salt
2 rounded tablespoons white sugar (add an extra if you want a sweeter 'nut)
1/2 cup milk
2 tablespoons melted butter
1 teaspoon of vanilla extract
1 large egg
1/8 teaspoon ground nutmeg
1 pound all-purpose flour, more as needed
6 ounces soft, unsalted, "European-style" butter (12 tablespoons)
Fist steps:
- Combine yeast and warm water, and let sit five minutes.
- Add the rest of the ingredients, except for the flour and the European-style butter, and whisk to combine.
- Add the flour, and knead for about three minutes or until a soft sticky dough ball forms.
- Wrap dough in plastic, and refrigerate for 20 minutes.
- Roll dough out into roughly a 18 x 9-inch rectangle.
- Proceed with butter as shown!