Cronuts! Part 2: The Sights and Sounds 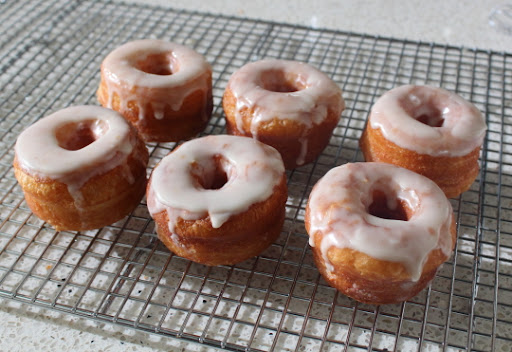 As promised, here’s the finale to our two-part cronut extravaganza! The series concludes with me frying the two batches – the first half fried as prepared in the last video, but the second half of the dough received an additional tri-fold, which resulted in a much higher, but less crispy cronuts.
Both were very good, and the second batch was more impressive looking, but I’m thinking that for a true croissant/doughnut hybrid, thinner and with less layers may be the way to go.

Of course, if you’re going to fill yours with vanilla custard, as is the custom in NYC, then the taller, airier cronut is probably a better delivery system. Rest assured, further exploration is inevitable. 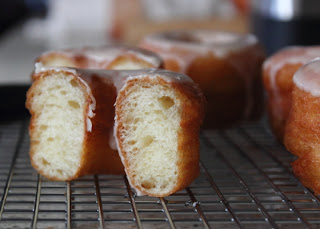 In case you’re wondering, the second half of the dough was frozen overnight, and then thawed in the fridge until soft enough to work with, so it seems as though making and freezing this would not be problem. I hope you give this a try soon. Enjoy!
Note: These cronuts were fried in grapeseed oil, at 350 degrees F. for about 1 1/2 to 2 minutes per side. Click here to watch Part 1.