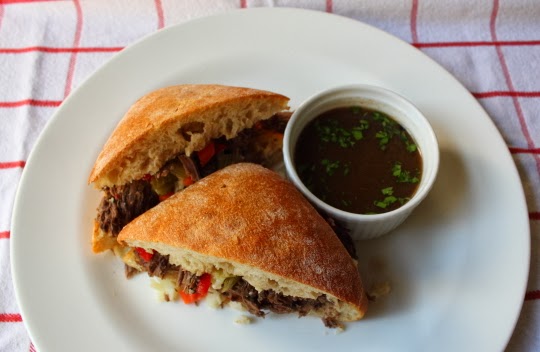 I’ve always wondered how stewed beef would work instead of the traditional sliced roast beef for Chicago’s famous Italian Beef Sandwich, which is kind of weird, since I’ve only had the classic version a few times, and never actually made it myself.

I figured if you’re going to roast a hunk of beef, then slice it and put it back in the juices, why not just cook the meat in a broth to begin with? How had the fine people of Chicago not thought of this obvious adaptation? Were the same people running the Cubs also in charge of civic recipe improvements? Was Kanye West somehow to blame? And another thing; why the hell would the Bears give Jay Cutler that new contract? 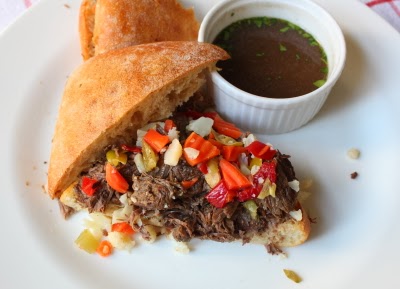 Anyway, once I finished my mad experiment, I realized that this wasn’t an improvement on an old sandwich at all; it was just a new sandwich. While the flavors are similar, the texture and overall mouthfeel of this sandwich is completely different. It’s much closer to pulled pork in that respect, but delicious nevertheless.
So, while this ended up not being the Chicago Italian beef breakthrough I had hoped for, it did make for a fine lunch, and if you’re looking for a manly hand-meal for your next shindig, I hope give this tasty, and very juicy sandwich a try. Enjoy!
Ingredients for 4 large sandwiches:
1 1/2 or 2 pounds beef chuck, cut in 2-inch chunks, seasoned with salt and pepper to taste
1 tbsp vegetable oil
6 cloves garlic, sliced
1/4 tsp red pepper flakes. to taste
1 tbsp dried oregano
1 tsp dried thyme
1 tsp dried rosemary
1 tsp freshly ground black pepper
1 1/2 tsp salt or to taste
1 bay leaf
2 tbsp white vinegar
3 cups chicken broth, or enough to cover meat by an inch
4 crusty sandwich rolls
1 cup drained Giardiniera (pickled vegetables), chopped into a relish
- Brown meat and simmer covered in the remaining of ingredients until tender
Posted by Unknown at 3:27 PM