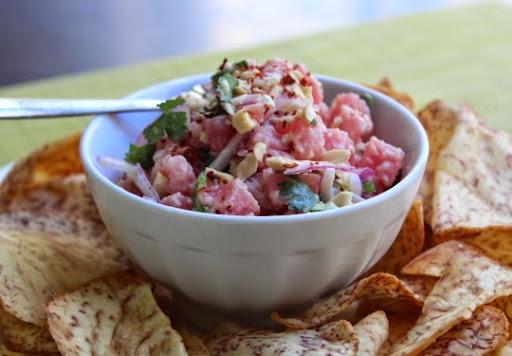 Don’t worry; this delicious coconut and cashew tuna tartare recipe has nothing to do with Will Smith, although now that I think about it, the Fresh Prince of Bel-Air would have loved this. I’m actually referring to Willi’s Seafood in Healdsburg, where I lifted this version.
I tried to stay as close to the recipe as possible, with the one exception. They use lots of thinly sliced jalapeños, but I wanted a little more heat, I so went with minced Serrano chilies instead. While they are hotter, I missed the texture and flavor of the milder rings, so I recommend using those instead. I also will recommend that you toast the cashews, which will make them even sweeter and richer tasting. 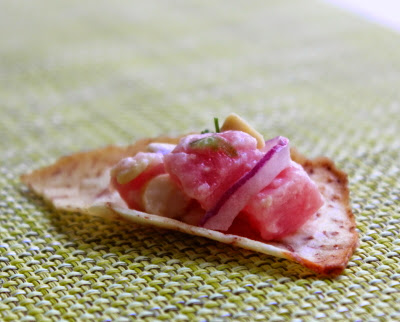 Feel free to tweak this any way you want, including adding more coconut milk. Michele is on record as preferring twice as much as I used here, which will give you a looser, but much more luxurious mixture. This also needs a good amount of salt to bring the flavors together, so taste and adjust carefully. You could certainly use other salty seasonings like soy and/or fish sauce, but you already knew that.
Regarding the tuna, I used a frozen piece of  “Sushi Grade” yellowfin (aka Ahi). It may surprise you to learn that virtually all the sushi you eat, including that sashimi you love so much, has been sliced from recently thawed fish. Not only does this ensure freshness, as the fish is frozen just after being caught, but this also kills potentially dangerous parasites.
It’s the irrational fear of having one’s brain eaten alive that prevents many from enjoying this tasty raw treat, but if you use the tuna we’re recommending, you should be fine. Also, for maximum enjoyment, be sure to keep everything ice cold, and only toss right before serving. This is not something to make ahead and let sit in the fridge. I hope you give this unique tuna tartare recipe a try soon. Enjoy!
Ingredients for 4 portions:
8 oz frozen "Sushi Grade" Yellowfin tuna (aka Ahi), diced, kept ice cold)
2 tbsp chopped cashews
2 tbsp sliced red onions
2 tsp grated fresh ginger
1 lime, juiced, plus more to taste
salt to taste
2 tbsp thinly sliced fresh jalapeño rings or 1 tbsp minced serrano pepper
1/4 cup coconut milk, or more to taste
1 tbsp torn cilantro leaves
dried red chili flakes to garnish
Taro chip, optional (you can also use fried wonton chips, or sweet potato chips)
Posted by Unknown at 1:46 PM