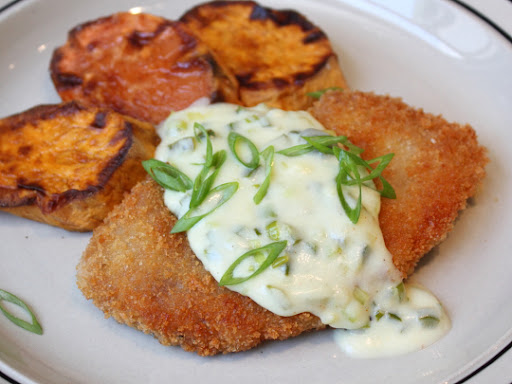 This is what happens when you have two food wishes in your head at the same time. I’ve wanted to do a schnitzel video für immer, but thanks to another recent food wish, I was also craving biscuits with cream gravy. So, I sort of did both, and it worked out well. Very well.
The crispy pork cutlet part of the presentation is very simple and straightforward, but it did afford the opportunity to share my new breading system. With all the time you’ll save, you can hit the gym to burn off this less than light, but extremely satisfying meal.
I’ve never been a big fan of the 3-pan breading system. Once you dredge meat in the prescribed dish of seasoned flour, you have to toss the rest. The whole idea is to simply coat the meat with flour, so why not just sprinkle on already seasoned meat? We use much less flour that way, and with zero waste.
From there, we’re not dipping these in a bowl of beaten eggs. Why do that, when we can just dump one egg on to the same plate and toss to coat. Faster, easier, and one egg is plenty for four cutlets.
As far as the cream gravy goes, the jalapenos and green onion probably seem logical, but some may raise an eyebrow over the diced dill pickle. I’m not sure exactly why I added them, but I just had one of those feelings. Pickles and pork, dill and cream sauce, it felt right, and it tasted even righter.
By the way, you can substitute veal, beef, turkey or chicken for the pork without missing a beat. Anyway, I hope you give this easy pork cutlet, delicious cream gravy, and/or new breading system a try soon. Enjoy!
Ingredients for 8 Cutlets (makes four entrée size portions of 2 cutlets each):
2 fully trimmed pork tenderloins, cut into 8 pieces, pounded flat
salt and pepper to taste
flour as needed
2 eggs
about 3 cups panko breadcrumbs
For the gravy:
2 tbsp melted butter
1/3 cup diced dill pickles
1 or 2 jalapeños, small dice
1 bunch green onions, chopped
salt and cayenne to taste
1 1/2 tablespoon flour
1 1/2 cup cold milk, plus more to adjust thickness if needed

View the complete recipe
Posted by Unknown at 10:00 PM