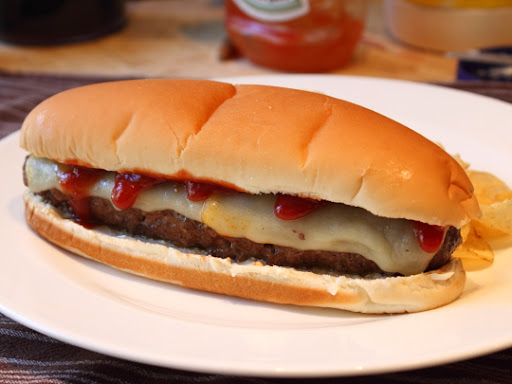 This “burger dog” is far more than a hot dog shaped cheeseburger. It’s a testament to American ingenuity and being close to the right place at the right time. While I’m posting this as a fun, 4th of July grilling idea, my real motivation is to tell this “only in America” story of food stand stardom.
As the story goes, Bill “Burger Bill” Parrish didn’t want to buy two different kinds of buns for his tiny snack stand, which he operated on Lake Merced, near the Olympic Club in San Francisco. Since there’s no such thing as flat, round hot dogs, Bill decided to shape his burgers to fit the hot dog bun, and The City’s most storied cheeseburger was born.
The irresistible and geometrically superior burgers became so popular that golfers at the Olympic Club would send their caddies over to grab as many burger dogs as they could carry. Eventually the very exclusive club offered to let Bill set up his trailer on the course, near the 11th hole, where they’ve been a fixture ever since. 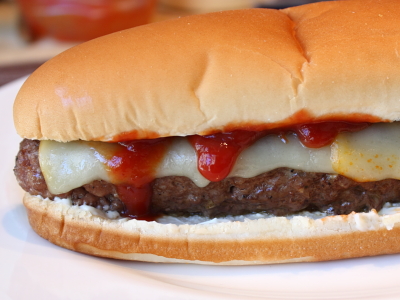 The course is only open to members, so the only way to taste one of these rare beauties is if you’re invited to play as a guest. I’ve had the pleasure twice, and both times the burger experience was just as memorable as the golf. They really are brilliant.
Above and beyond fitting the uni-bun, Burger Bill’s rectangular meat ended up being culinarily superior for all the reasons I brag about in the video. The shape insures a great crust of grill marks, and a perfect meat-to-bun ratio as you eat your way down the length.
With all deference to Mr. Parrish, I’ve added an extra bonus technique of seasoning the inside of the burger before it’s formed. When you add this to the aforementioned attributes, you’re talking about a great, and uniquely American burger experience. I hope you give these a try soon. Enjoy!
Ingredients per burger dog:
8 oz ground beef (80/20 grind)
1 large hot dog bun
1 slice cheese
salt and pepper to taste

View the complete recipe
Posted by Unknown at 10:31 AM