Lamb Shank Vindaloo – Be Careful What You Wish For 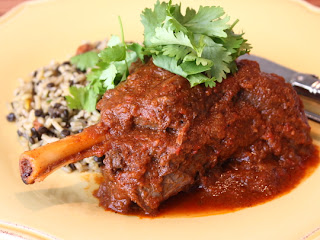 Considering all the off-the-wall stuff I say in the videos, I don’t get that much negative email, but one of the more common complaints is, “Dude, where’s the Indian food?” Well, this succulent and spicy lamb shank vindaloo is for you!
I have very little experience cooking Indian food, so that this came out as deliciously as it did is nothing short of amazing. That said, I’m sure you Goan cuisine “experts” will let me know how to make this even better next time.
The name “vindaloo” comes from a Portuguese dish called "Vinha d' Alhos," which is basically pork stewed with wine and garlic. After being introduced to India, the wine became vinegar, chicken and lamb replaced the pork, and many local spices and chilies were added…other than that, it’s exactly the same.
This is almost always done with cubes or chunks of meat, but I decided to go with the very user-friendly lamb shank instead. Portioning is simple, as one shank feeds one person, but what’s even more exciting for the novice cook is the fact that this is almost impossible to mess up. Simply simmer on low until the meat is fork tender. That’s it! I hope you give this very tasty lamb curry dish a try soon. Enjoy!
Ingredients for 4 Portions:
4 lamb shanks
For the marinade:
1/2 cup cider vinegar
1/4 cup vegetable oil
1 tbsp tamarind concentrate (I’ve never used tamarind before, so I’m not sure how this would convert to fresh or tamarind pulp, but I’m sure there are people that know!)
1 1/2 tablespoons garam masala
2 tsp salt
For the wet mixture:
1 onion, chopped
1 cup cherry tomatoes
1/3 cup sliced ginger
8 cloves garlic, peeled
1/2 cup water
For the spice mixture:
1 teaspoon ground cinnamon
1 teaspoon ground cumin
1 teaspoon ground mustard
1 teaspoons freshly ground black pepper
1 1/2 teaspoons cayenne
1 1/2 tablespoon paprika
For the rest:
3 tablespoons clarified butter (melt butter and skim off the white milk solids)
1 large onion, chopped
salt and pepper to taste
1 rounded tablespoon brown sugar
cilantro leaves, optional

View the complete recipe
Posted by Unknown at 9:01 PM