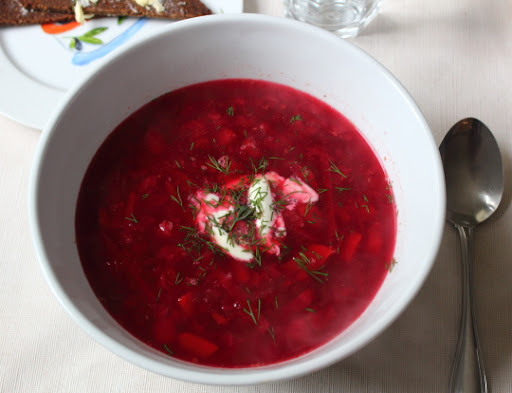 This delicious and vividly colored beef borscht is the first soup I can ever remember eating. Every summer, we’d drive to New York City to visit my father’s side of the family. His father was Ukrainian, and his mother was Polish, and like the pierogis they’d have ready for us, this beef and beet soup was always a very welcomed part of the trip.
It was also this soup that started my lifelong love of adding sour cream to things. The way the tangy, rich cream melted into the hot, beefy broth was a wonder to behold, and unlike any other soup I’d eat the rest of the year. Speaking of beefy broth, I only used one measly piece of shank, but you are welcome to add one or two more to make this even more awesome.
Of course, there are a thousand versions of borscht, and as usual I have no idea how authentic this is, which is fine since, well, it’s soup for God’s sake. Beside what vegetables to add or delete, there is also the question of temperature.
Word on the street is that the Ukrainian/Russian versions are served piping hot, and that the Polish versions are served chilled. However, there does seem to be a general agreement as far as beverage pairings go. I’ll let one of my YouTube followers, Afterapplepicking, explain:
“Hot, beefy, red, Russian borscht is﻿ only to be served with copious amounts of beer or vodka. Which is quite a distinction from the cold, vegetarian, pink Polish borscht, which is only to be served with copious amounts of beer or vodka.”
Well said! Anyway, I hope you give this blast from my soupy past a try soon, and as always, enjoy!
Ingredients (amounts not critical!)
2-3 quarts of beef broth
(to make your own: simmer a well-browned beef shank or two in 3 quarts of water for 4 hours, or until the meat is falling off the bone, and completely flavorless)
1 bay leaf
1 cup chopped carrots
1/2 cup chopped celery
1 onion, chopped
3 cups sliced beets
2 cups chopped cabbage
salt and pepper to taste
1/4 cup white vinegar, or to taste
sour cream and dill or chive to garnish
*This soup doesn't require a lot of thought. Simply simmer everything until tender!

View the complete recipe
Posted by Unknown at 5:19 AM