Ham with Red Eye Gravy – Something From Nothing is Something 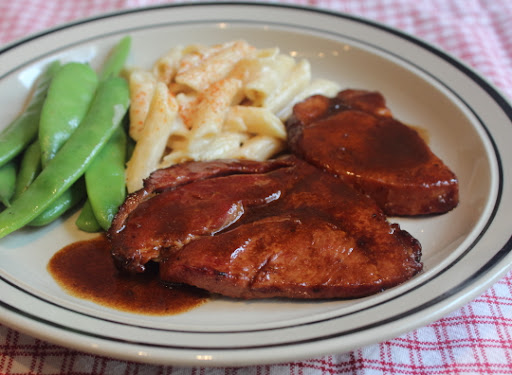 In this age of cutting back on fat whenever and wherever we can (and by “we” I mean “you”), we forget that throughout most of history, this was the complete opposite. Fat was a concentrated, powerful fuel that literally kept people going, and this red eye gravy is a little taste of those times.
The challenge in tough times is to make those greasy pan drippings more palatable, more interesting, and more delicious. It’s not like families struggling through the depression had pots of demiglace reducing on the stove, or bottles of Cabernet Sauvignon sitting around to deglaze their cast iron skillets – heck, they probably didn’t even have a decent Merlot. So they used what they had; like a splash of leftover coffee.
Is this a recipe that would have been developed based solely on how awesome it tastes? Probably not, but that’s not to say it isn’t still very tasty. It is. The way the bitter coffee marries with the sweet, smoky fat is far from unpleasant, and infinitely better than simply pouring the pan drippings over your food.
By the way, the name apparently comes from the fact that when the sauce is poured in a bowl and brought to the table, the fat and coffee separate, it takes on the appearance of a big, reddish eye. Of course there’s another legend about how General Andrew Jackson told a hung-over cook to make a gravy for his ham that was as red as his bloodshot eyes.
I’m pretty sure whoever made up that story also had very red eyes, but not from whiskey. Anyway, like I said in the video, I did this as more of a culinary experiment than a “you have to try this” recipe, but regardless, I think it’s an interesting dish, and one I’d be interested in hearing about if you do try. Enjoy!
Ingredients for 2 portions:
1/2 cup of chopped fatty ham scraps
1 tbsp vegetable oil
4 thick slices of ham
1 tsp flour
about 2/3 cup black coffee
black pepper and cayenne to taste

View the complete recipe
Posted by Unknown at 7:18 AM