Cream of Cauliflower – Come for the Soup, Stay for the Bacon Gremolata 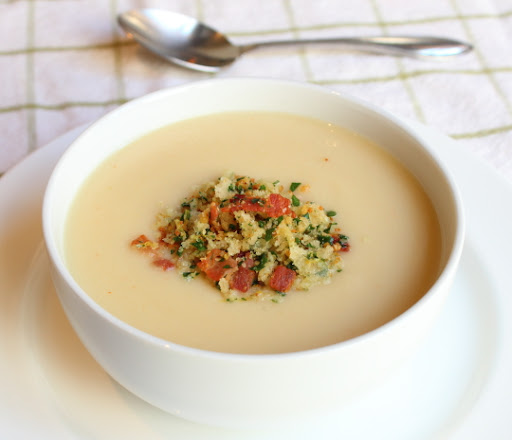 We’re heading into the heart of hot soup season, and this cream of cauliflower will ward off autumn’s chill with the best of them. I’m a big fan of the cauliflower in all forms, but this simple soup may be my favorite application.
Of course, human nature being what it is, I wasn’t satisfied with just the soup, and wanted to garnish with something new and exciting. Unfortunately, I couldn’t think of anything, so I decided to follow that age-old advice which says, “when in doubt, bacon.”
I’ve garnished soups like this with bacon before, but never tried toasting breadcrumbs in the rendered fat. Not surprisingly, it worked very well, and the additions of lemon zest and parsley elevated things even more. The only problem with a recipe like this is the next time I’m served a cream of cauliflower, no matter how good it is, I’m going to be a little sad there’s no bacon gremolata floating on top.
By the way, I realize there are no breadcrumbs in a true gremolata, but I thought it sounded kind of cool, and besides, I’ve never been that big on respecting the sanctity of culinary terms. I was going to go with “baconized breadcrumbs,” but that sounded a little too much like molecular gastronomy, which is much worse.
If you’re not into eating animals, some diced shiitake mushrooms and a pinch of smoked paprika would be a great substitute in the gremolata. You’d also need to add some olive oil to replace the rendered bacon fat, but you probably knew that.
Now that I think about it, that vegetarian version sounds pretty amazing as well. Maybe next time I’ll skip the bacon and…oh, who am I kidding? Anyway, I hope you give this delicious fall soup a try soon. Enjoy!
Ingredients for about 8 servings:
1 onion, chopped
1 rib celery, chopped
1 tbsp olive oil
3 cloves garlic
salt to taste
1 large russet potato, peeled, quartered
2 heads cauliflower, trimmed
1 quart chicken broth
1 quart water
1/2 cup cream
cayenne to taste
For the gremolata:
4 strips bacon
1 1/2 cups fresh breadcrumbs
1 tbsp lemon zest
2 tbsp chopped Italian parsley

View the complete recipe
Posted by Unknown at 11:08 AM