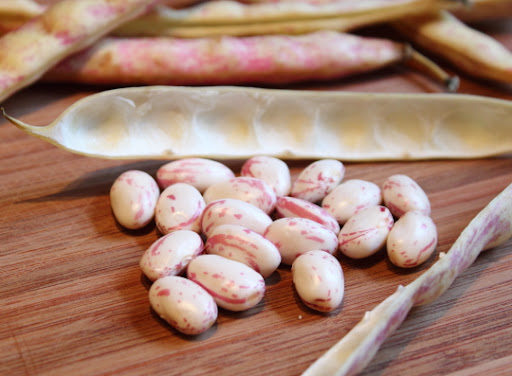 During this video, which features a rustic and deeply satisfying bacon and cranberry bean ragout, I make a joke about the great British actor Rowan Atkinson’s appearance at the Olympics. Based on all the thoughtful, politely worded comments I’m getting on YouTube, apparently I’m the only one in the world who’s not a huge Mr. Bean fan.
Based on the response, I’m clearly missing something. While I find Mr. Bean more creepy than comedic, I’ve been told to ignore the movies he did for American theaters (…”Ha! It’s funny ‘cause he fell down!”), and instead check out some of his brilliant work on British television. Well, that’s not going to happen anytime soon. I still haven’t finished catching up on all the Benny Hills. 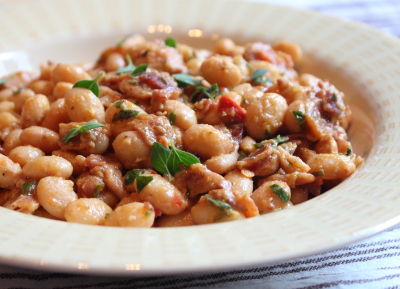 Anyway, as usual, I’ll assume I’m wrong and Mr. Bean really is comedy gold. My sincerest apologies to Mr. Rowan Atkinson – not so much for my harmless one-liner, but for him possibly finding out about the slight, and having to read this lame excuse for a pork and beans post.
Oh yeah, the bacon and cranberry bean ragout! It was super tasty, and as I stated in the clip, would make a stellar side dish to pretty much anything coming off your late summer grill. I hope you give it a try soon. Enjoy!
Ingredients for 4 side dish portions:
1 cup shelled cranberry beans
1/4 cup minced shallots
4 or 5 slices of bacon
1 tsp olive oil
salt and pepper to taste
4 cloves garlic, crushed
2 cups chicken broth, or as needed
2 tsp chopped rosemary
2 tsp lemon zest
2 tbsp lemon juice
cayenne to taste
2 tsp extra virgin olive oil
1 tsp hot chilies
1 tbsp fresh herb like Italian parsley, chervil, oregano, etc.

View the complete recipe
Posted by Unknown at 12:35 PM