If you were following our trip to Chicago via Twitter and/or Instagram, you may have seen these pictures already, but I wanted to do a quick post with links to all the great places we dined at while in the Windy (and very delicious) City. By the way, all these were taken with a cell phone, usually in very poor light, so apologies for the quality. Enjoy! 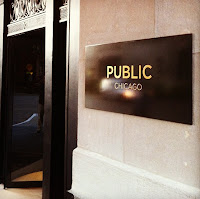 Our home for the week was the very hip and happening, Public Chicago. The staff was beyond helpful, and the accommodations top notch. How cool was our hotel? World famous DJ Paul Oakenfold dropped by one night to spin tunes in the bar, that’s how cool.

Still not convinced? Chris Martin and Gwyneth Paltrow were spied walking through the lobby. Also, there were rumors about a celebrity chef from YouTube partying like a rock star on the 14th floor, but that could not be independently confirmed. 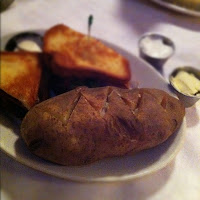 When I first get into a new town after traveling a long journey, I don’t necessarily want to run right out for a fancy meal. I’m always hoping there’s a nice, casual restaurant near the hotel where I can get some simple comfort food to help me settle in.

We found that at PJ Clarke's. A near-perfect BLT was loaded with smoky, crisp bacon; but the star of the plate was the freakishly large baked potato. It was like getting a "welcome to Chicago" bear hug. 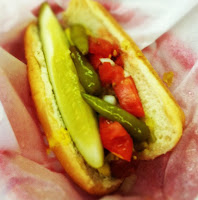 Of course we HAD to try a Chicago style hot dog, which we experienced at Five Faces Ice Cream Shop. I basically like any hot dog, and this was no different.

While I’m more of a plain mustard guy, it did make me feel good knowing that, contrary to what you hear, the people of Chicago were getting some vegetables in their diet. 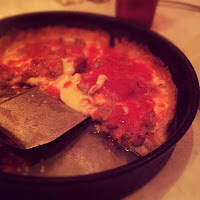 We also had to get some deep-dish pizza, since that’s a City ordinance for all tourists visiting longer than 3 days. Failing to do so results in a $1500 ticket or having to watch a Cubs game (most people just pay the fine).

We did a sausage pie from Pizano’s Pizza & Pasta, and enjoyed it very much. By the way, the thin crust vs. deep-dish debate is just about the stupidest thing ever, as these are two completely different foods – both genius in their own way. 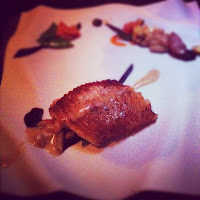 For my birthday dinner, Michele took me to Boka. We enjoyed a wonderful tasting menu, which reminded me of Commonwealth in style and attitude. Lots of very interesting food, done very well, served by people that enjoy what they’re doing.

My favorite was probably this skate wing with huitlacoche purée. They also get bonus points for pairing the chocolate dessert with beer. 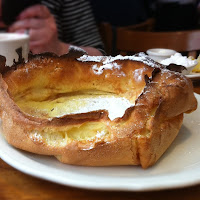 Finding a decent breakfast joint near your hotel is always a great joy, but The Original Pancake House was so far beyond decent that we are still talking about it.

Perfect spinach and feta omelets, amazing potato pancakes, and something called a Dutch Baby. This oven-puffed pancake takes 20 minutes to cook, and is served simply with lemon wedges and powdered sugar, but it alone is worth a trip to Chicago. 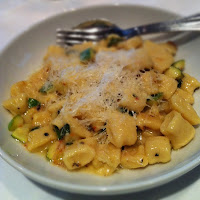 I know I already posed a recap of the fabulous rehersal dinner at The Bristol, planned and presented by my cousin Tony Quartaro, but for my money you just can’t look at too many pictures of gnocchi.

These were made with ricotta cheese and garnished with zucchini and mint. They were pure awesomeness. 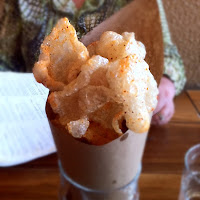 What’s better than spicy pork rinds? Free spicy pork rinds! That’s right, when The Publican found out (and by “found out” I mean that I told them) that Chef John from Food Wishes was in the house, these warm, crispy gifts from the Gods suddenly appeared.

If you’re a fan of Best Thing I Ever Ate you may have seen these, and they were incredible, as was the rest of the meal. 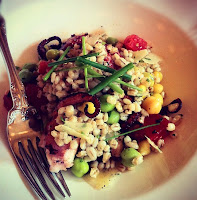 This place is known for its meaty fare, but the most interesting plate we tried was this grilled octopus with barley, fresh garbanzos, and watermelon. It was really, really good.

After I posted the picture online, someone commented that certain things should never be served together. What an idiot. 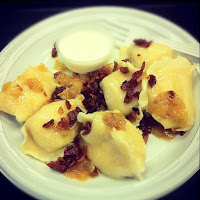 Since I’m 25% Polish, I was very much looking forward to trying some of Chicago’s famous Eastern-European cuisine. This isn’t something we have a lot of in San Francisco, and I was not disappointed.

We found this little hole-in-the-wall called Pierogi Heaven, and it was. Perfect little potato and farmer’s cheese dumplings, topped with bacon and fried onions. Come on, San Francisco restaurant industry; please open a few of these here! 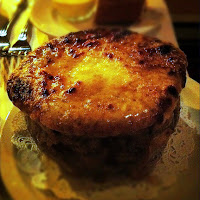 We celebrated Bastille Day where everyone should celebrate Bastille Day, in an authentic Bistro. At Bistrot Zinc, we looked at nude art, ate frisée salads with poached eggs on top, and of course, slurped French onion soup in all its caramelized gruyere glory.

I poke a lot of fun at the French, mostly because they deserve it, but all kidding aside, they know how to eat. 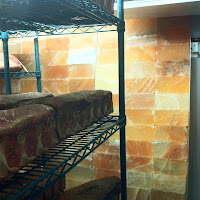 We finished our eating adventures at David Burke's Primehouse. I’ve been fortunate enough to eat some world-class beef in my day, but this was right up there with anything I’ve ever had. They age the prime meat in the basement, and the back wall is actually made from blocks of pink salt.
It was too dark to get any decent shots of the steaks, but I had the 35-day Kansas City Strip, and Michele went for the even funkier 55-day old Ribeye. The amazing depth of beefy flavor and buttery texture made meat memories that will not soon fade. 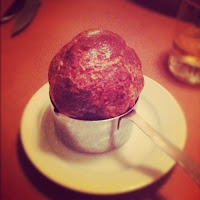 The side dishes were great, the service was excellent (a reoccurring theme during our stay), and all was accompanied by these gorgeous popovers. They’ve been haunting my dreams, and as soon as I figure out how they did them, I will share in a video.
Anyway, I hope you enjoyed this very brief glimpse into our culinary adventures in “Chi-Town” (I had the good sense to not use that while I was there). Thanks to everyone who so generously offered their personal tips and recommendations. We simply didn’t have enough time to eat everywhere we wanted, but we will be back for sure!  Thank you, Chicago!
Posted by Unknown at 12:05 PM