Perfectly Puffy Popovers – What Do These Have in Common with Most Chefs? 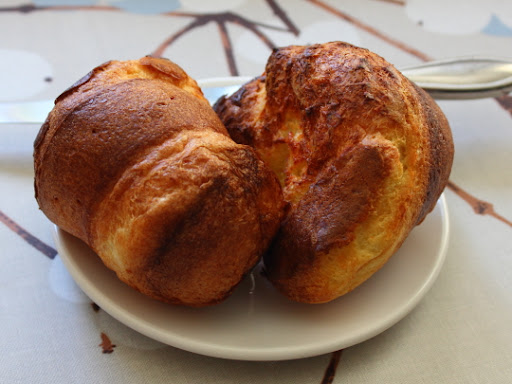 They’re crusty outside and full of hot air inside. After posting that picture of the perfect popover I had in Chicago, a reader by the name of Elizzaruth left a comment to share her recipe, which she described as “stupid easy and adaptable.” She had me at stupid.
Since it'd been like 15 years since I’d made them, I figured I give her formula a try, and then adapt it as needed. Turns out it didn’t need any adapting. It worked as advertised, and really was ridiculously simple.
I imagine the only major variable would be your oven. If it doesn’t have an accurate thermostat, or takes an extra long time to come up to temperature, then you could have issues, but other than that, not much can go wrong.
One important note: As soon as this went live on YouTube, the Brits were out in force, insisting it was nothing more than a renamed Yorkshire pudding. Well, far be it from me to educate them on their own cuisine, but unless it's cooked in greasy meat drippings, it's not Yorkshire pudding! It's okay. They get confused with recipes that aren't boiled.
I'd like to officially thank to Elizzaruth for her great recipe, and I hope the next time you want something visually impressive in your breadbasket, you give these easy popovers a try. Enjoy!
Ingredients for 8-10 Popovers:
1 cup all-purpose flour
1/2 tsp salt
2 large eggs
1 cup milk
pinch cayenne
2 tbsp shredded cheddar cheese, optional
*Fill generously greased muffin tins 3/4 with batter. Put in a cold oven, set to 450 and bake 30 minutes exactly.

View the complete recipe
Posted by Unknown at 9:55 AM