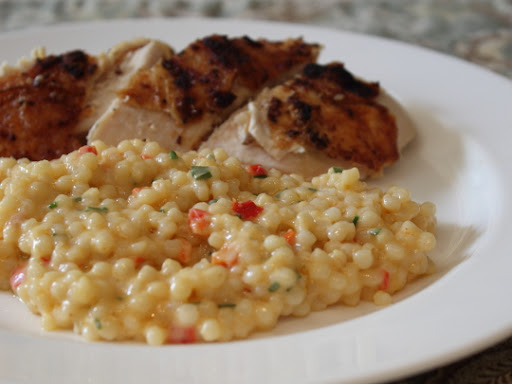 I’ve always been fascinated with Israeli couscous, also known as pearl couscous, and have received several food wishes recently for a recipe showing it off. I’ve had it most often in cold salads, but for whatever reason I decided to turn it into a hot side dish.
Since it’s nothing more than tiny balls of lightly toasted pasta dough, I thought it would work well in some type of macaroni-n-cheese application. I decided to skip the traditional béchamel and instead use more of a risotto technique. Short story short, it worked great!
I’ve always been a fan of the southern delicacy “pimento cheese,” so I decided to hedge my bets and toss in some of the bittersweet jewels. All in all, I really liked the dish, and how well it held up. The shot you see at the end, when I dig the fork in for a taste, was actually filmed three days after this was made, and had been reheated in the microwave. Despite sitting in the fridge, and the less then gentle reheating, it was still creamy and delicious.
By the way, the chives may seem like a simple, optional garnish, but they’re not. Put them in. They really finished this recipe off right, adding a fresh counterpoint to the semi-rich mixture. I hope you give this “ballsy” recipe a try soon. Enjoy!
Ingredients for 4 small, side dish sized servings:
2 tsp melted butter
1 cup Israeli couscous
2 cups chicken broth
1/2 cup heavy cream
1/4 cup diced pimentos
3 oz sharp cheddar cheese
salt, pepper, cayenne to taste
1 tbsp freshly sliced chives

View the complete recipe
Posted by Unknown at 3:55 PM